TRAVEL: ‘I still lose myself while making plans.’ 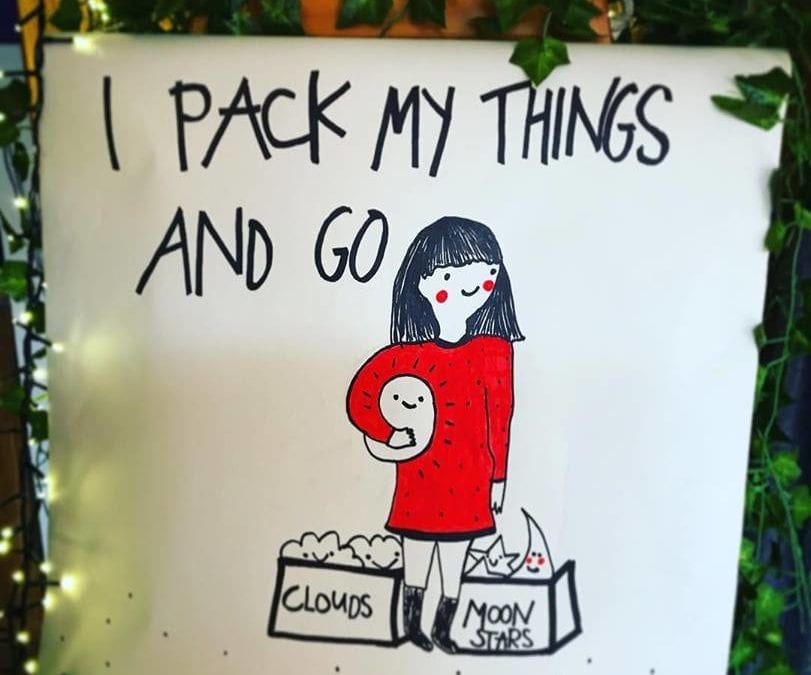 Taken from World Wide Princess Tales, a blog I wrote when I bought a worldwide ticket and left my life as I knew it. This blog captures the magic of travel and just how far you can travel on a little stardust and trust! And is so fitting while we contemplate the theme of the week… 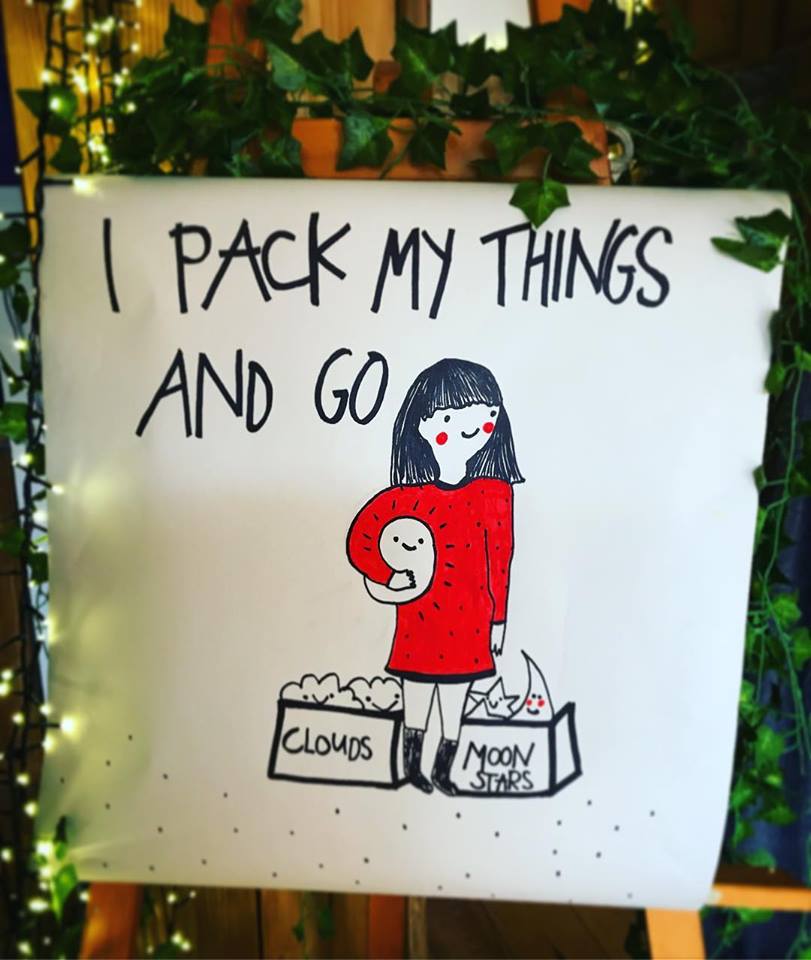 41~Kissed By An Angel, St.George, Saint Christopher and Doctor O

‘And I still lose myself
While making plans.’
~Above and Beyond

I drove from Las Vegas, leaving the glitz behind, heading into the warm hues of blue skies and pale sands. It was kind of into the unknown. I was heading to Zion, to hike Angel’s Landing. It felt like a calling, having had a few trusted souls tell me that was what I needed to do when I got to this corner of the world. I had found an air bnb and hoped that my plans would formulate from then on.

Crossing the state line felt filmic and here I was in Utah! St George was indeed saintly: I pulled into the tourist information and a lovely young girl gave me a map and highlighted a suggested scenic route round all the areas I hoped to see. She believed it was possible in the 8 days I had. I found my air bnb and realised that Chris was also a saint here in St George. He reassured me that we would sort out my trip and that Osama (a young Doctor from Philly, known amongst the nurses as and patients as Doctor O), a guest who he was so fond of, would be back from his day trip and we could sit down together on the deck tonight and plan out my journey. Amazing. I needed some guidance and here he was: Christopher, the Patron Saint of Travel. He unburdened me of my slight worries and absolved me of any apprehensions that I may take a wrong turn, miss a day by going somewhere not quite right- “Whatever you do, will be great. It is all amazing. But Osama and I can help you.” I went to watch the sunset. I reflected on trusting and believing. My sister had reminded me of these things before I set off into the unknown with no set plans. I looked at the land and returned to my car. Pretty sweet! 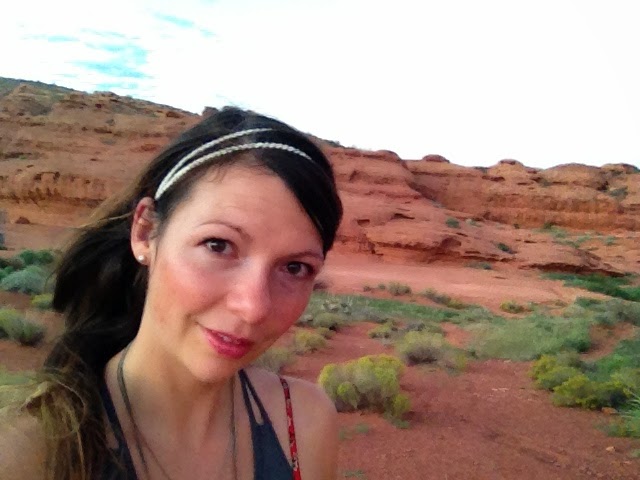 The darkening sky opened up a new world. The stars and constellations clear and bright. St George and my spiritual spot in which to rest my head was more than perfect.

What unfolded the next days were more than I could have imagined from all the wondrous words used when describing this part of the world. Angel’s Landing, the next morning, was the ‘BAM!’ that Chris thought would be my perfect introduction to a desert hike. I drove to Zion and began the ascent. Yikes, it is pretty awesome and the pictures do not do it justice in terms of the heights you achieve. Sitting at the top is a reward, indeed. This is exactly the place an angel would rest. As I closed my eyes and felt the air around it was as if I was kissed by angels and fell completely in love. 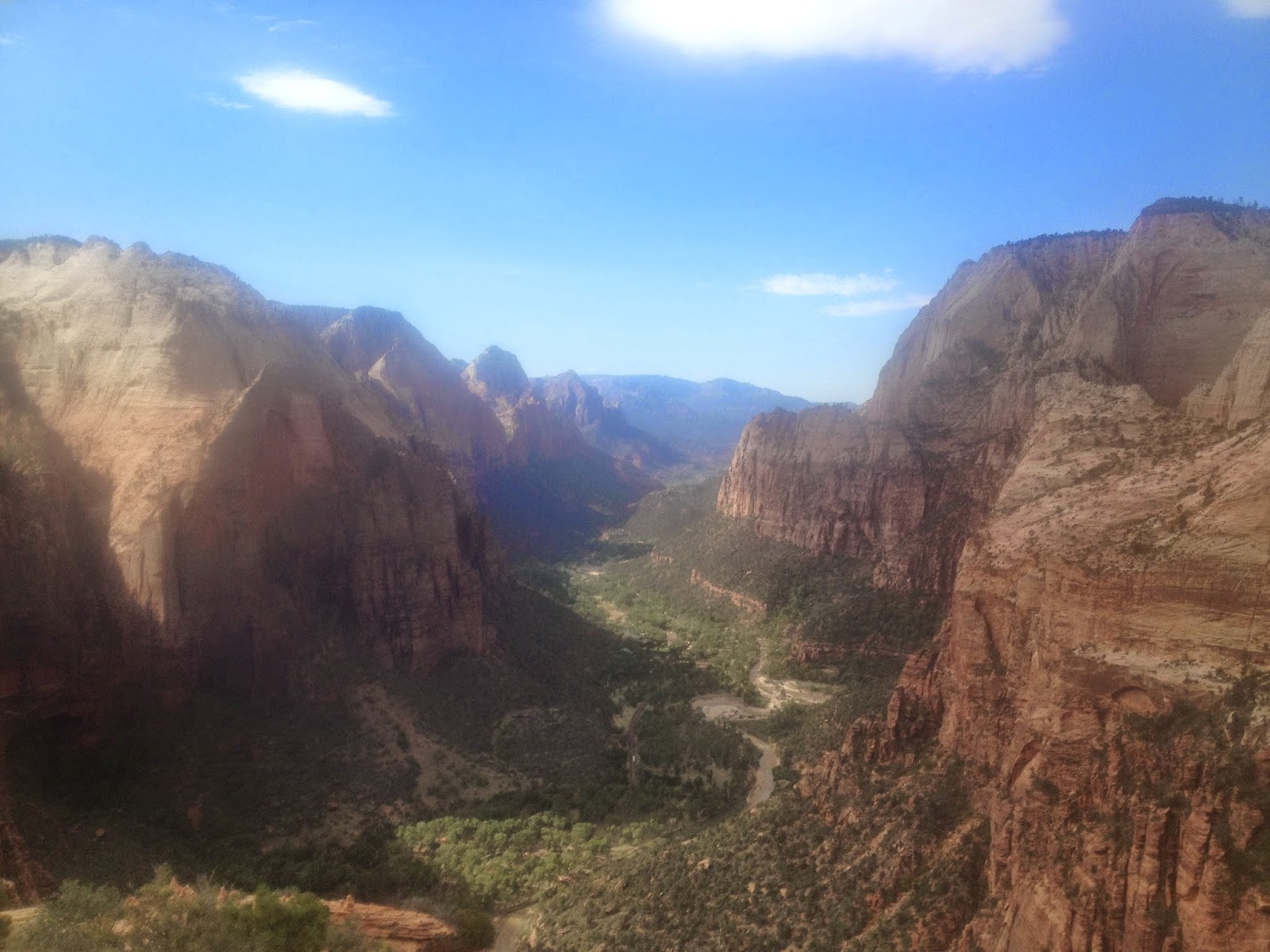 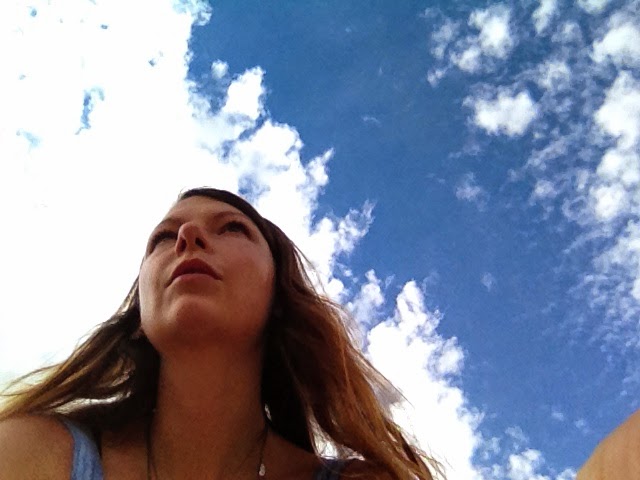 Please however, note the sweat- it is hard work! 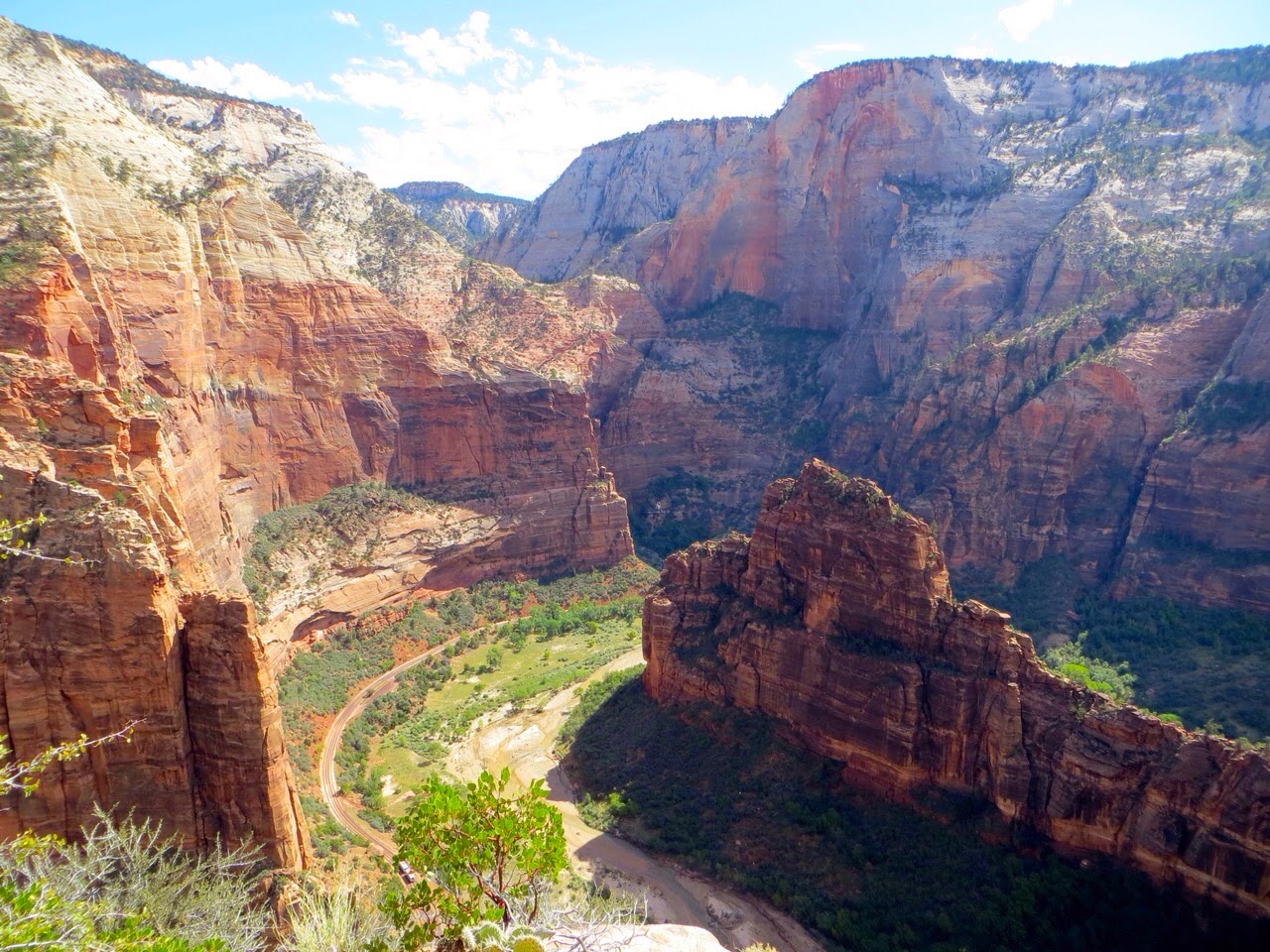 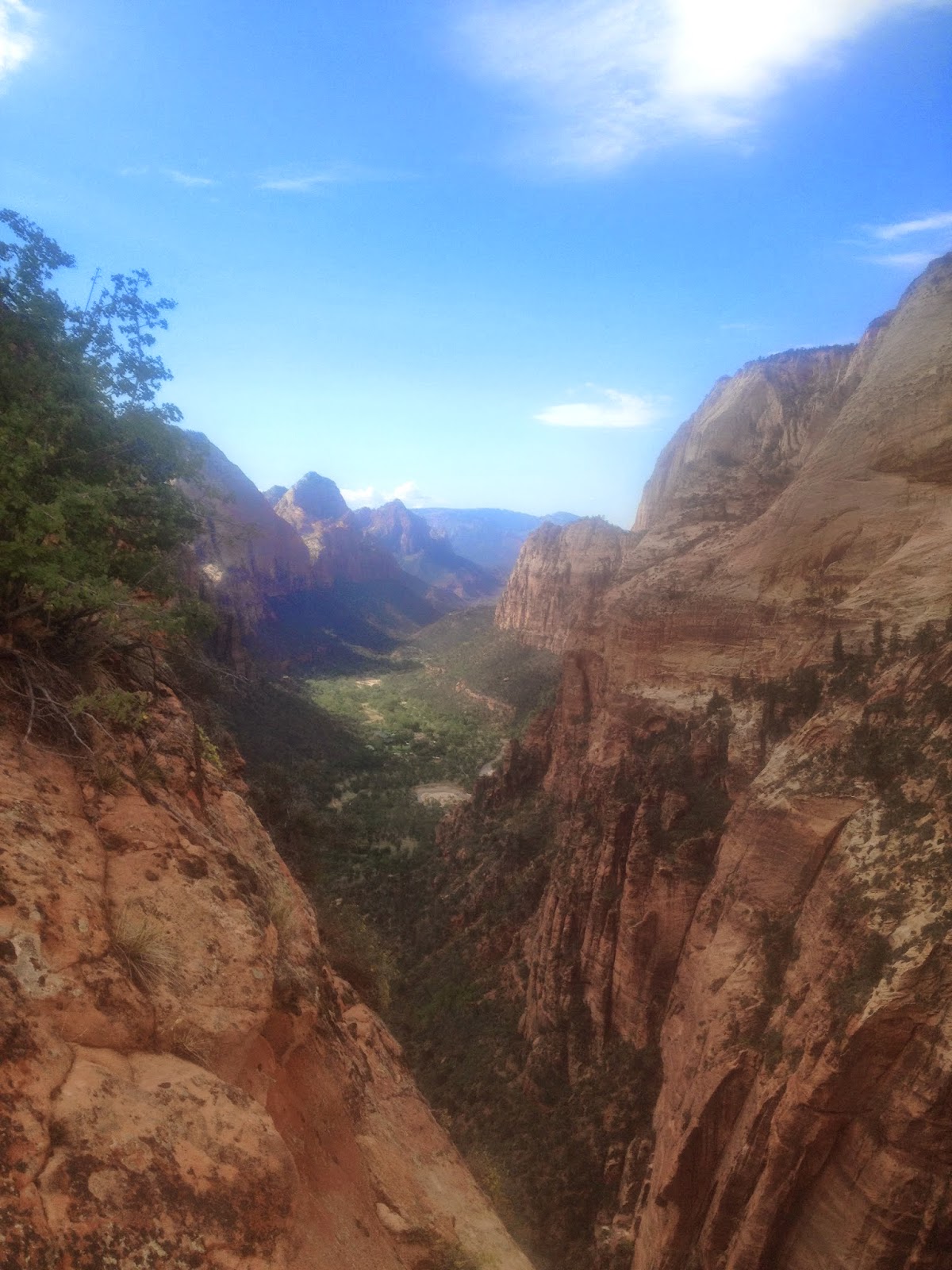 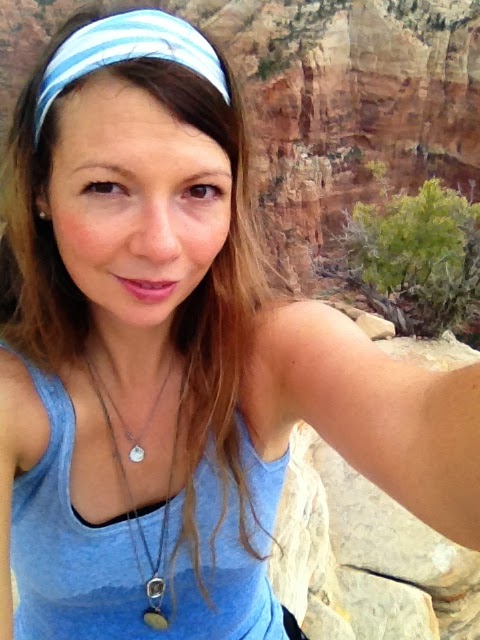 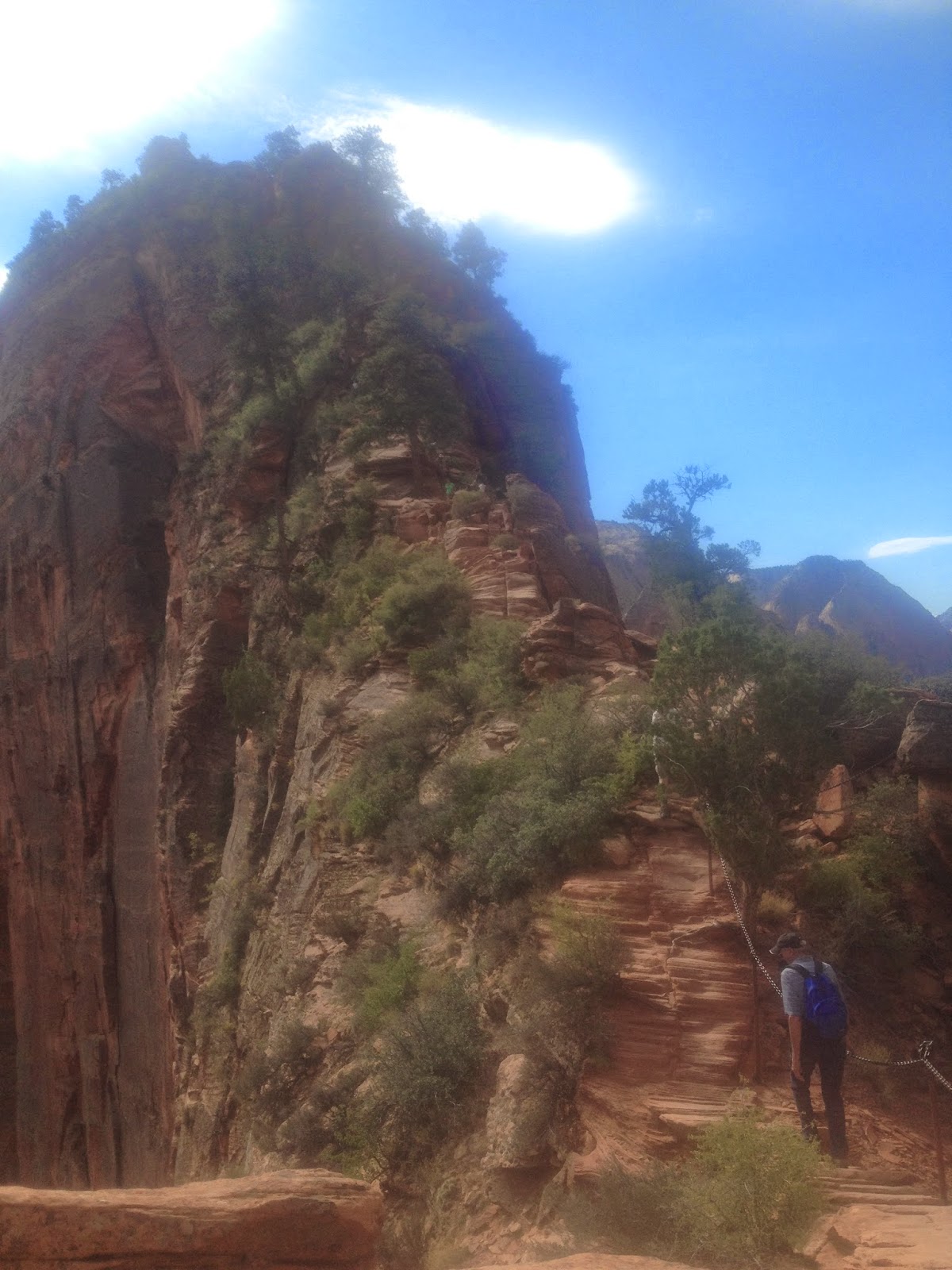 Osama kindly drove me around, showed me the spots nearby and we adventured around before he headed back to Philidelphia to once again don a suit and become Doctor Osama. He shared this song with me and when I listened to it, I thought of how I had felt just the other day, at the top of the world, where angels land.

‘Time held it’s breath
Emotion spelled a rapture
Across the room
A memory had been captured
And through the years
As distance lay between us
I carried your torch
To illuminate the darkness
I still lose myself in this orange glowing moment
When your upturned face seemed to answer all my questions
And I still lose myself
While making plans.’
~Above and Beyond

Photo and song courtesy of my friend, Doctor O.

Chris took us on an amazing adventure. Only a local, only a Saint would surely know of these secret spots. Pteroglyphs in hidden slots and a sea of undulating rocks that altered in their shades of red as the sun was slowly setting. 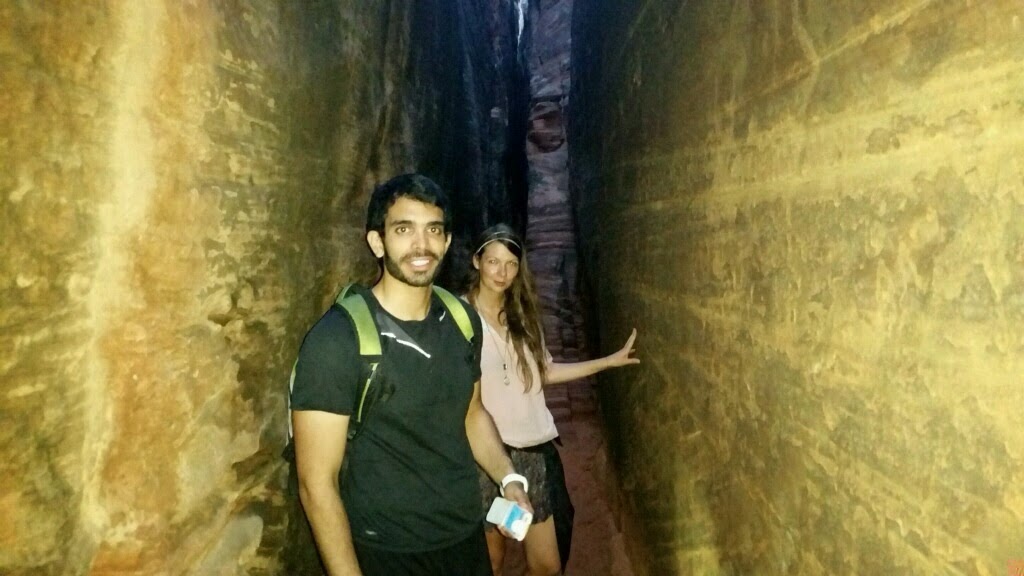 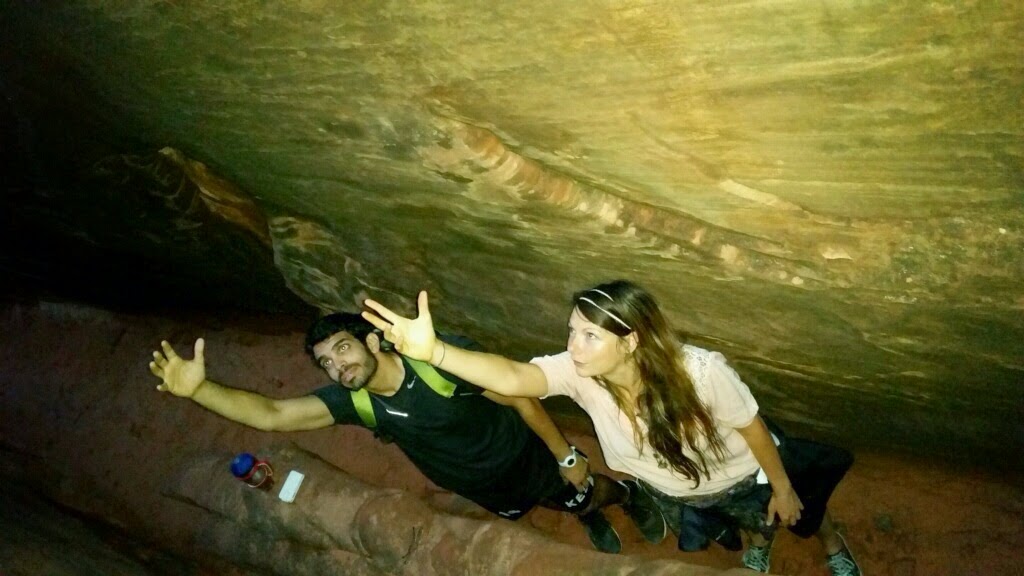 We were just leaving, Osama slightly unnerved with the imminent darkness encasing this world we were in. If he and I were alone, it would have been impossible to get back- all rocks begin to look the same, the twists and turns, scrambles and climbs we had made would not be easy to replicate. 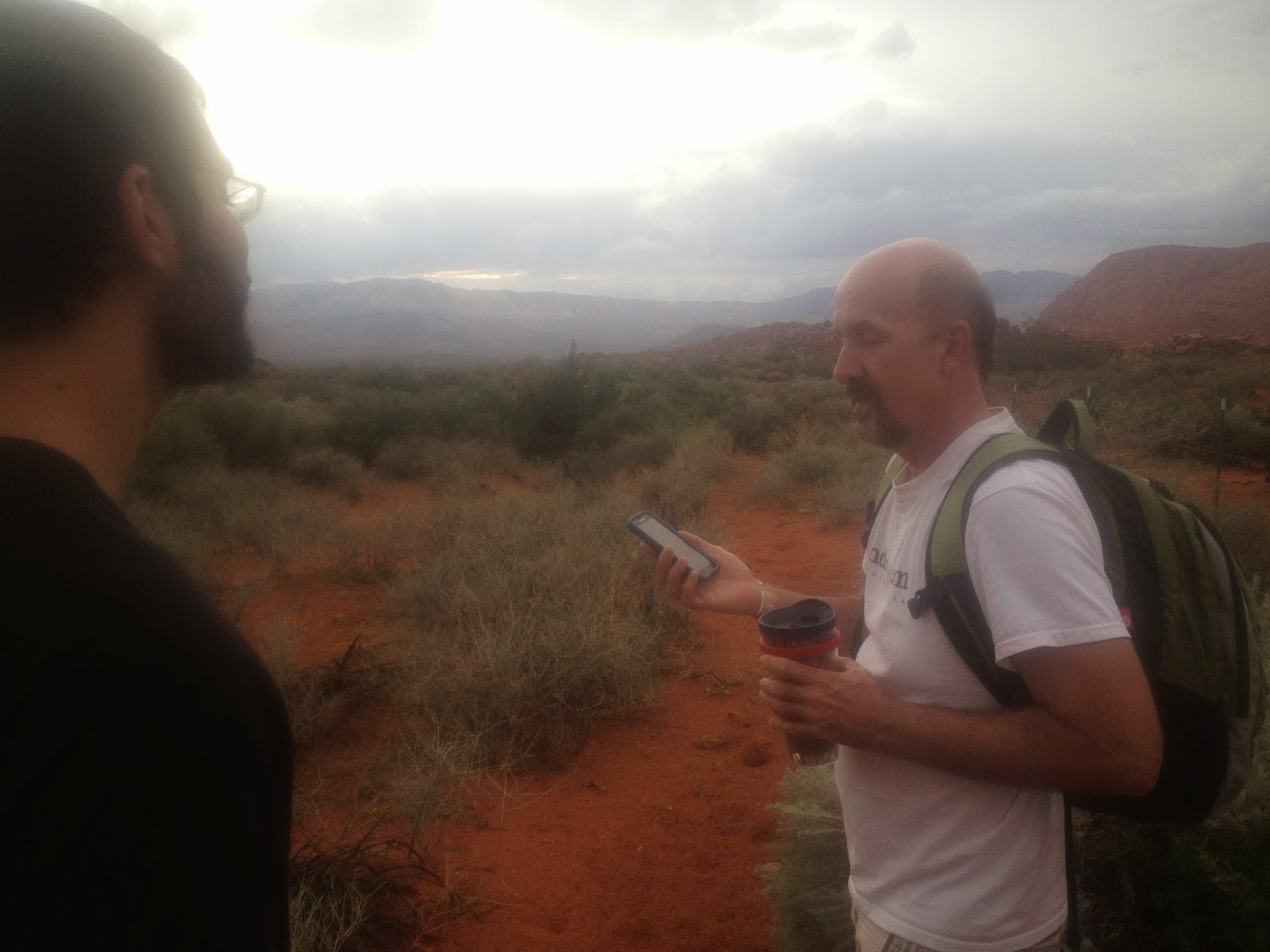 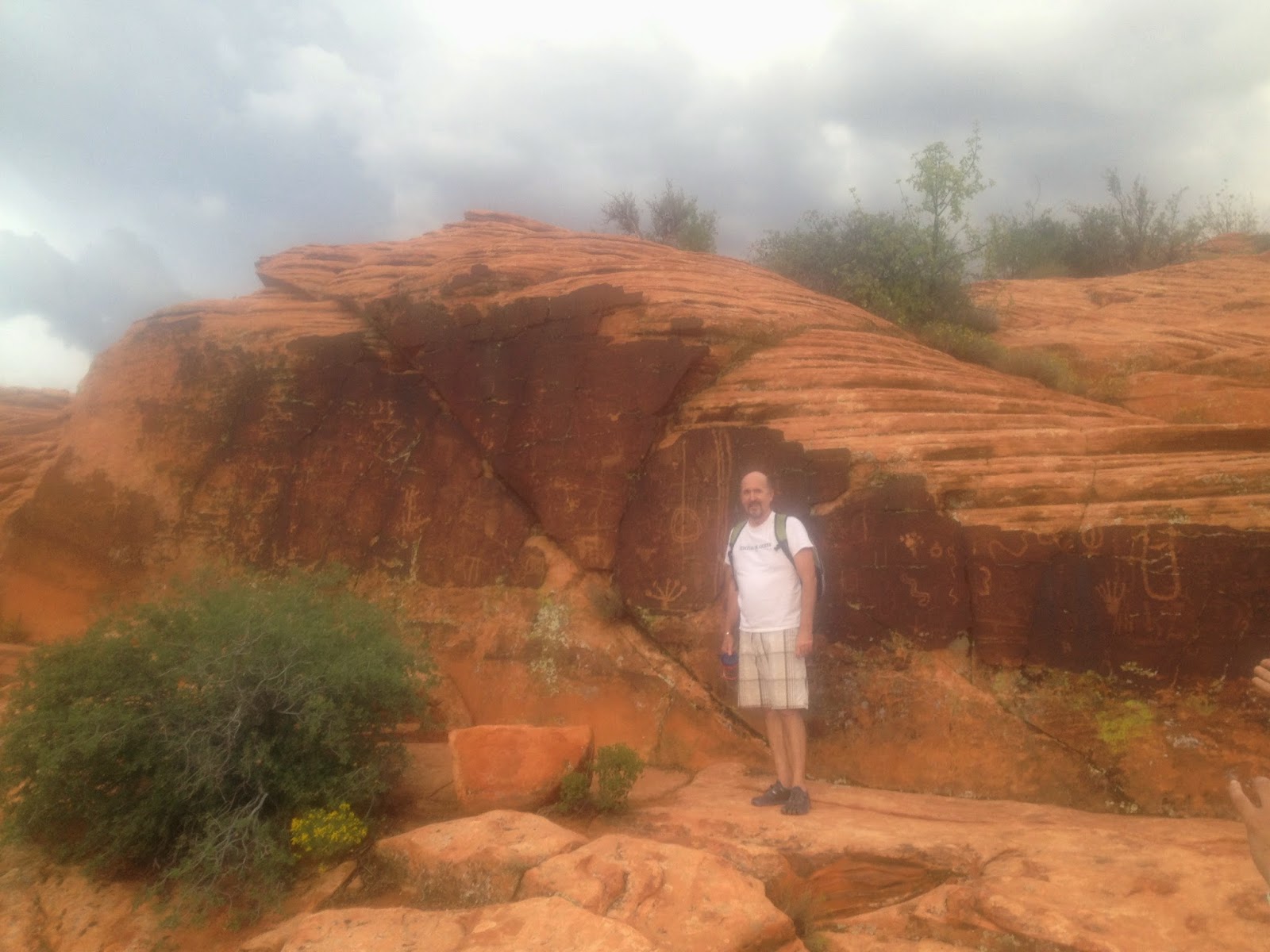 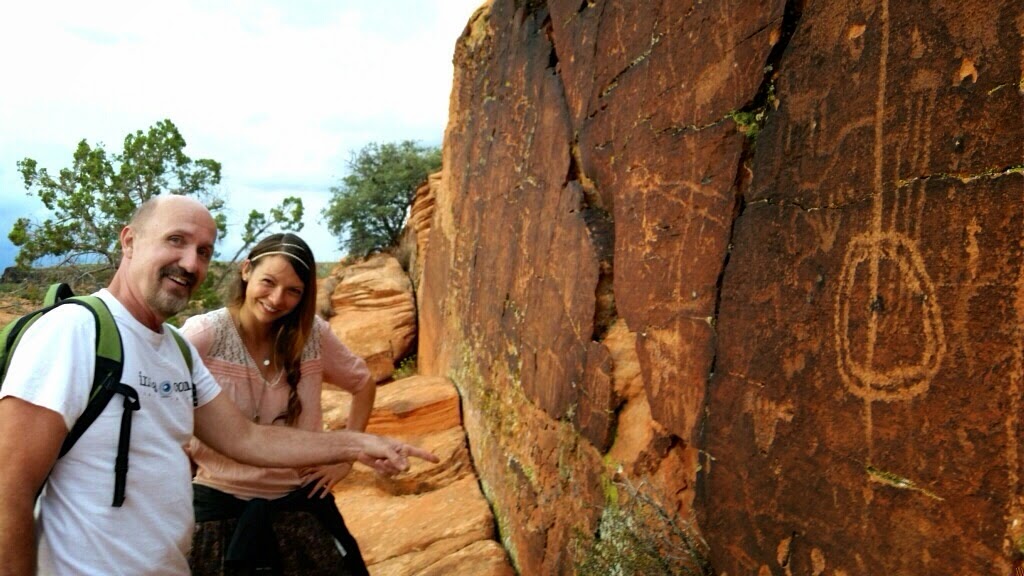 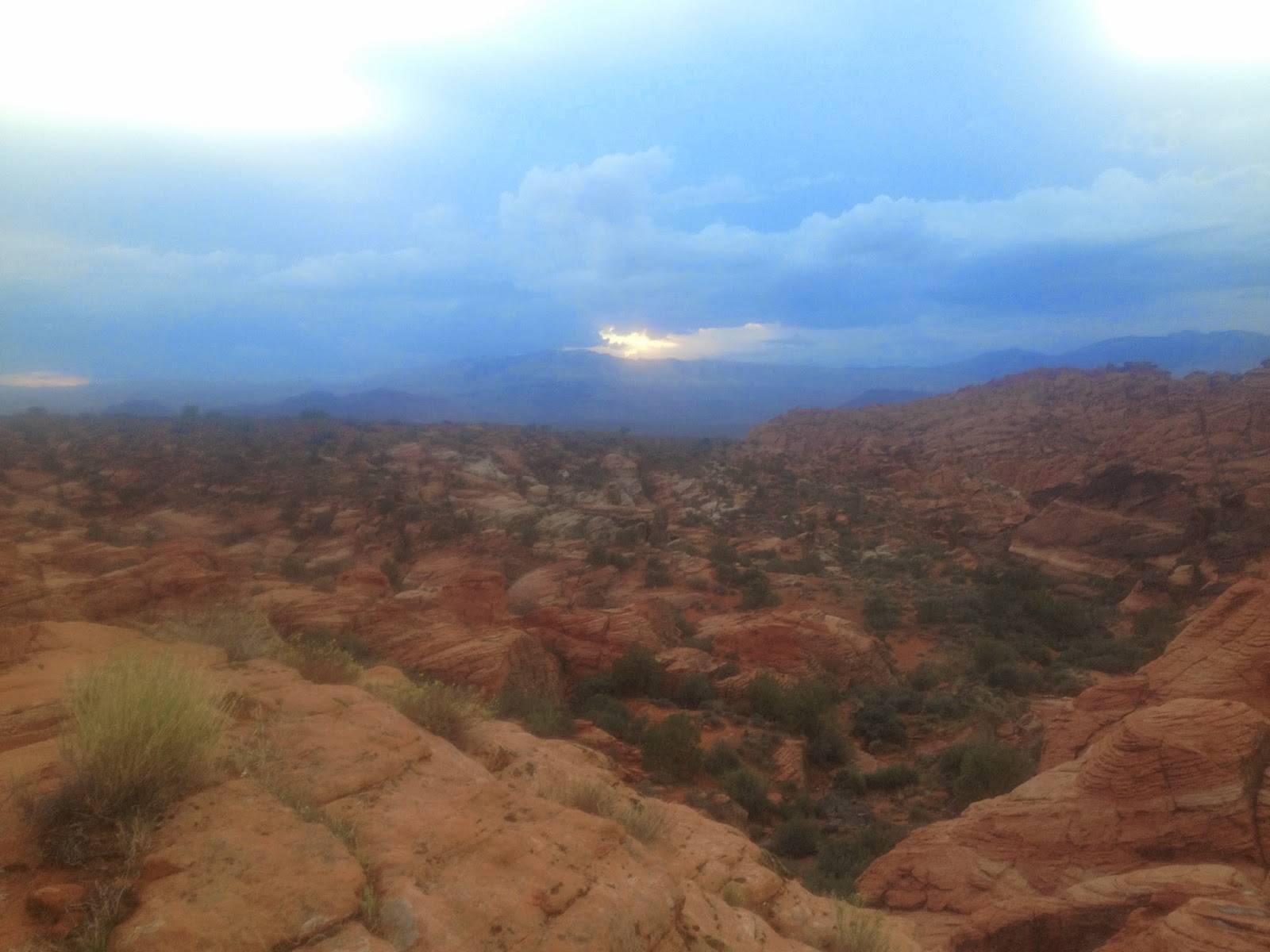 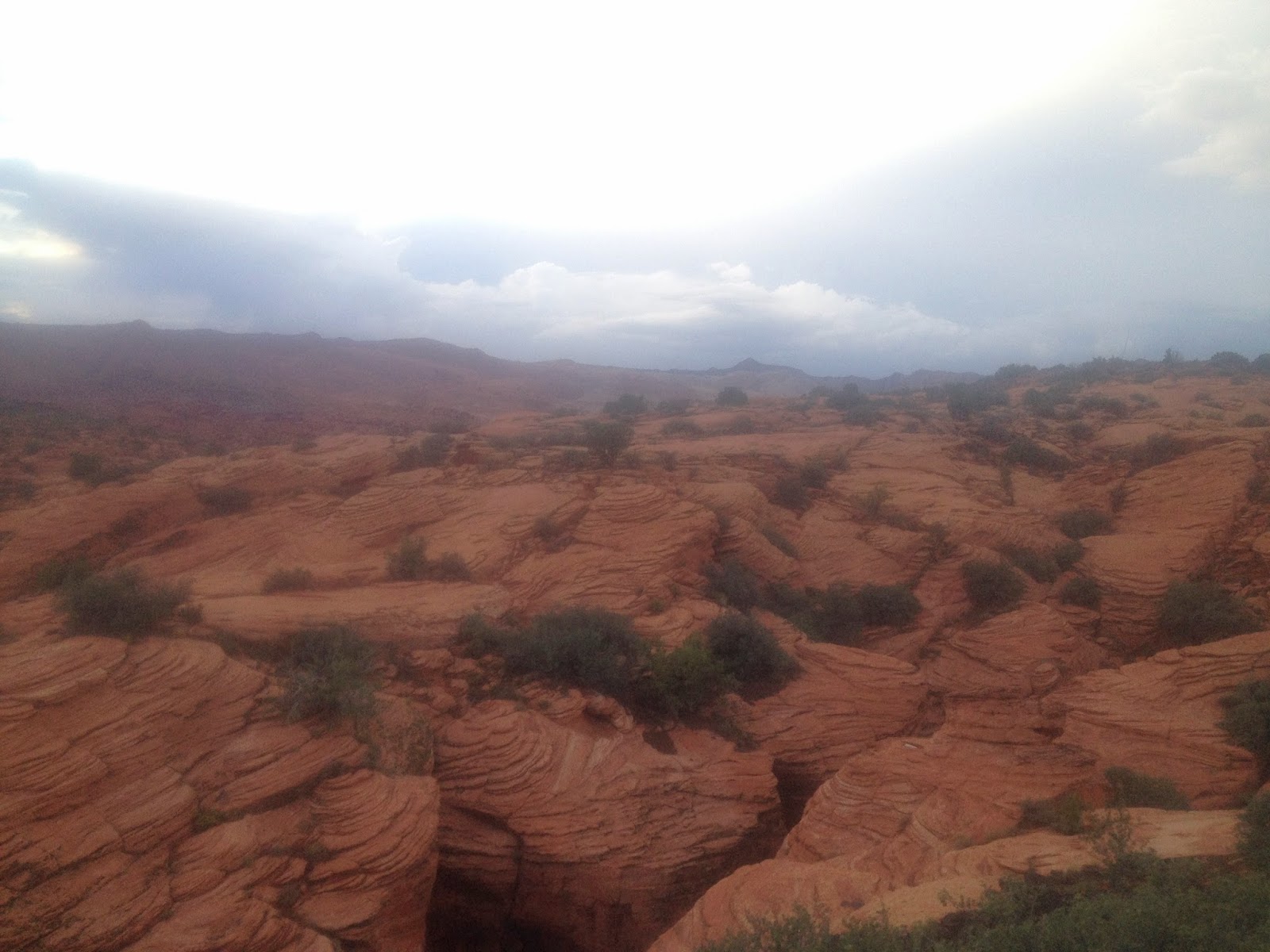 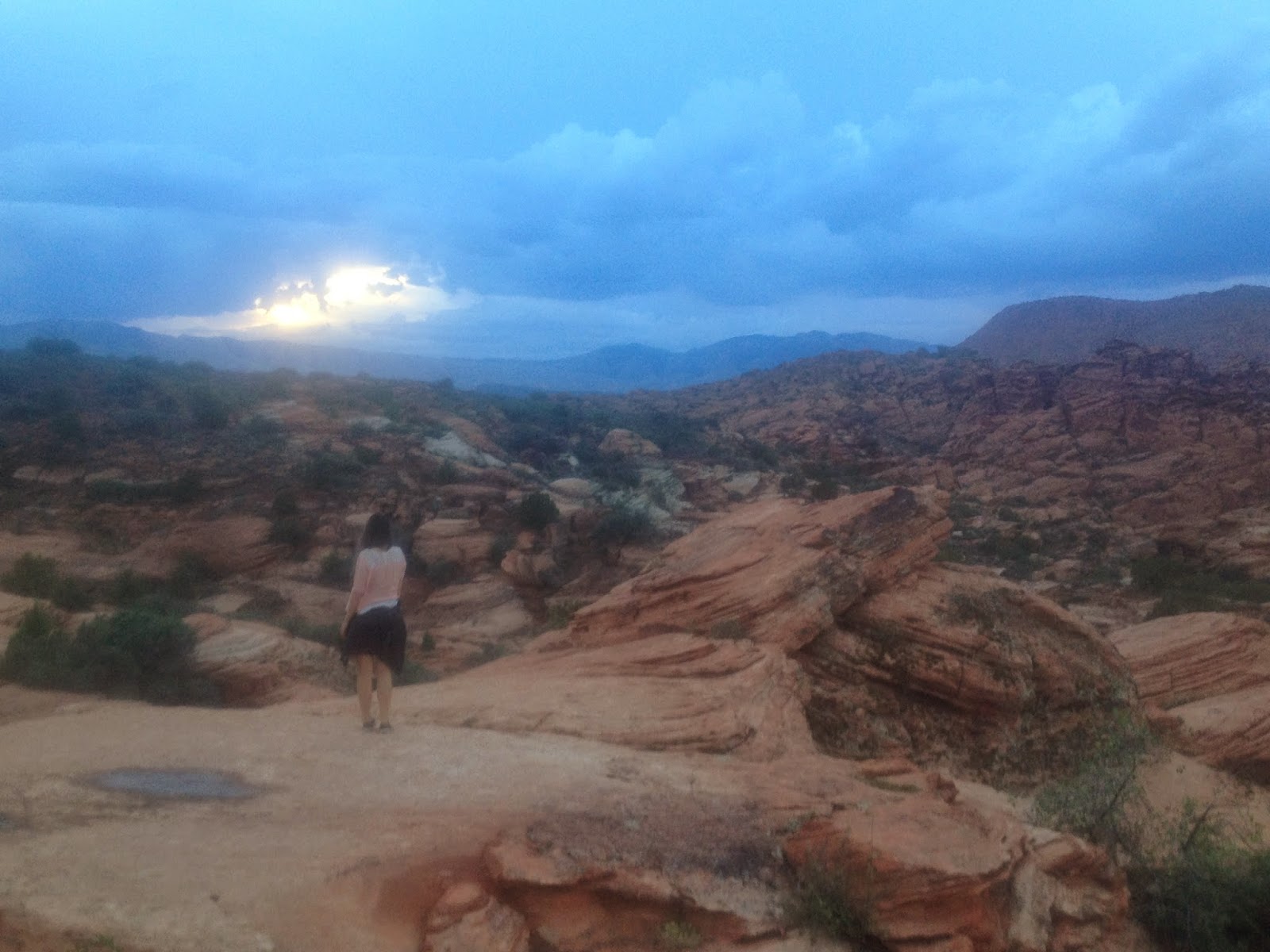 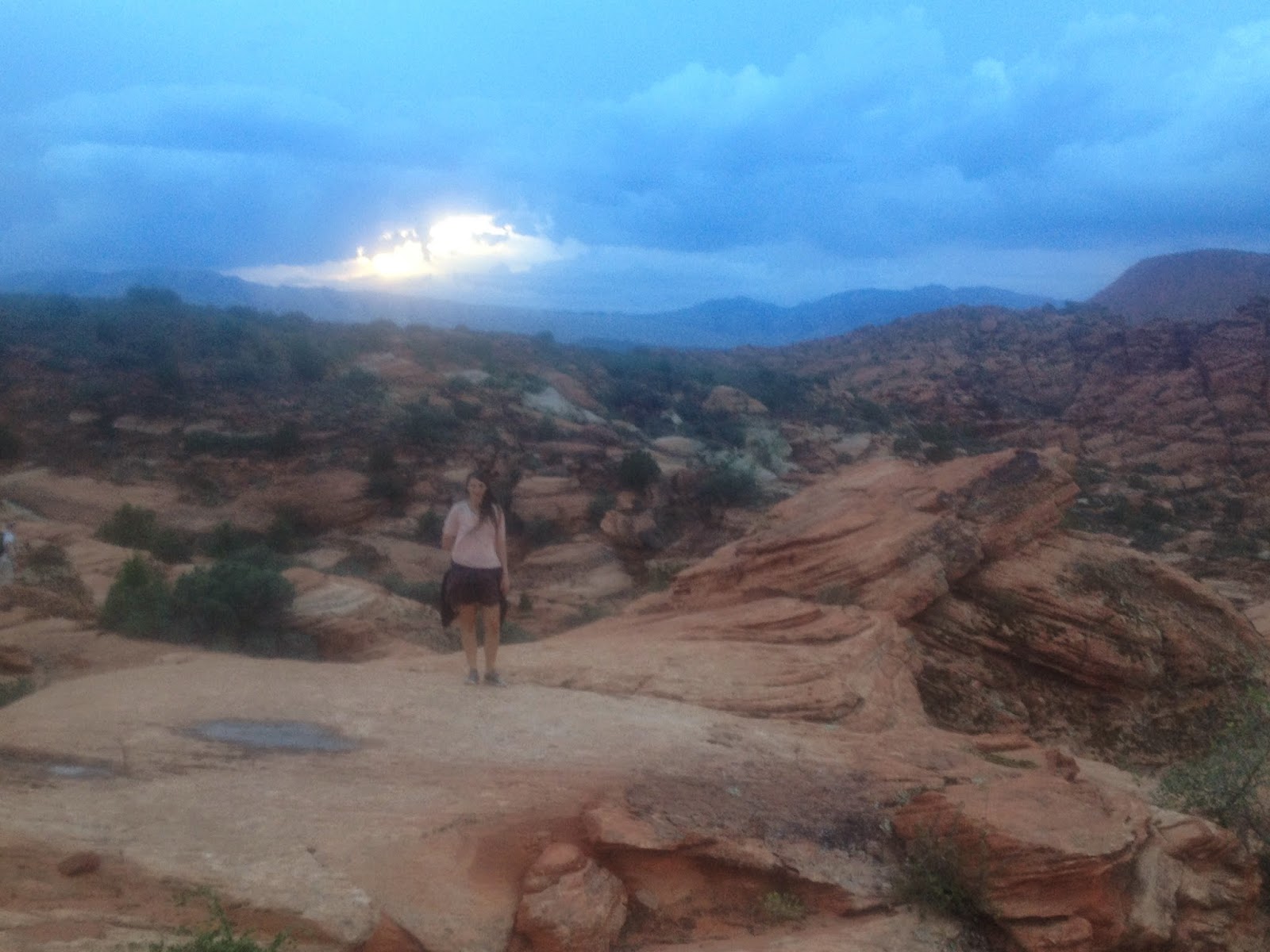 Osama had gone a short hike the other night when night began to fall and had called Chris as he was lost. Our Patron Saint of travels gave him a few tips, unconcerned as he knew it to be a trail and it sounded like he was on the right track. But darkness transforms the land and dark here is true darkness. Doctor O had to call 911. He is a pragmatic type (at the same time as being sensitive and so caring- a great combination). He was rescued (they were able to locate him and use a torch to draw him in the right direction) and we later learn that there are mountain lions and other dangerous animals that we should be aware of! Chris had called him an hour later to ask where he was and Osama did not lie when he said the supermarket. Great! Chris wanted him to pick up some milk. Our Saint Christopher was oblivious to his 911 adventure and rescue until he returned home!

Chris left Osama and I for one minute to relieve himself behind some desert foliage. I am exuberantly expressing myself as we discuss the different numbers you have to dial to access emergency services worldwide. I smack into a jumping cholla. And begin to panic. I am in good hands. As I wince and squeal, Doctor O tenderly and calmly sets to, pulling the spikes out of my hands and legs. Chris rushes to us and lets me squeeze his hand as the Doc does the work. I learnt my lesson- look where you are walking!

Doctor O and I attempted to go and do a hike the morning before he left, but were thwarted by a storm. We ended up through a series of seemingly random twists and turns having a perfect morning. A double rainbow; a souvenir from a market we happened upon; a walk around a Mormon church; a wonderful drive and the chats we shared. 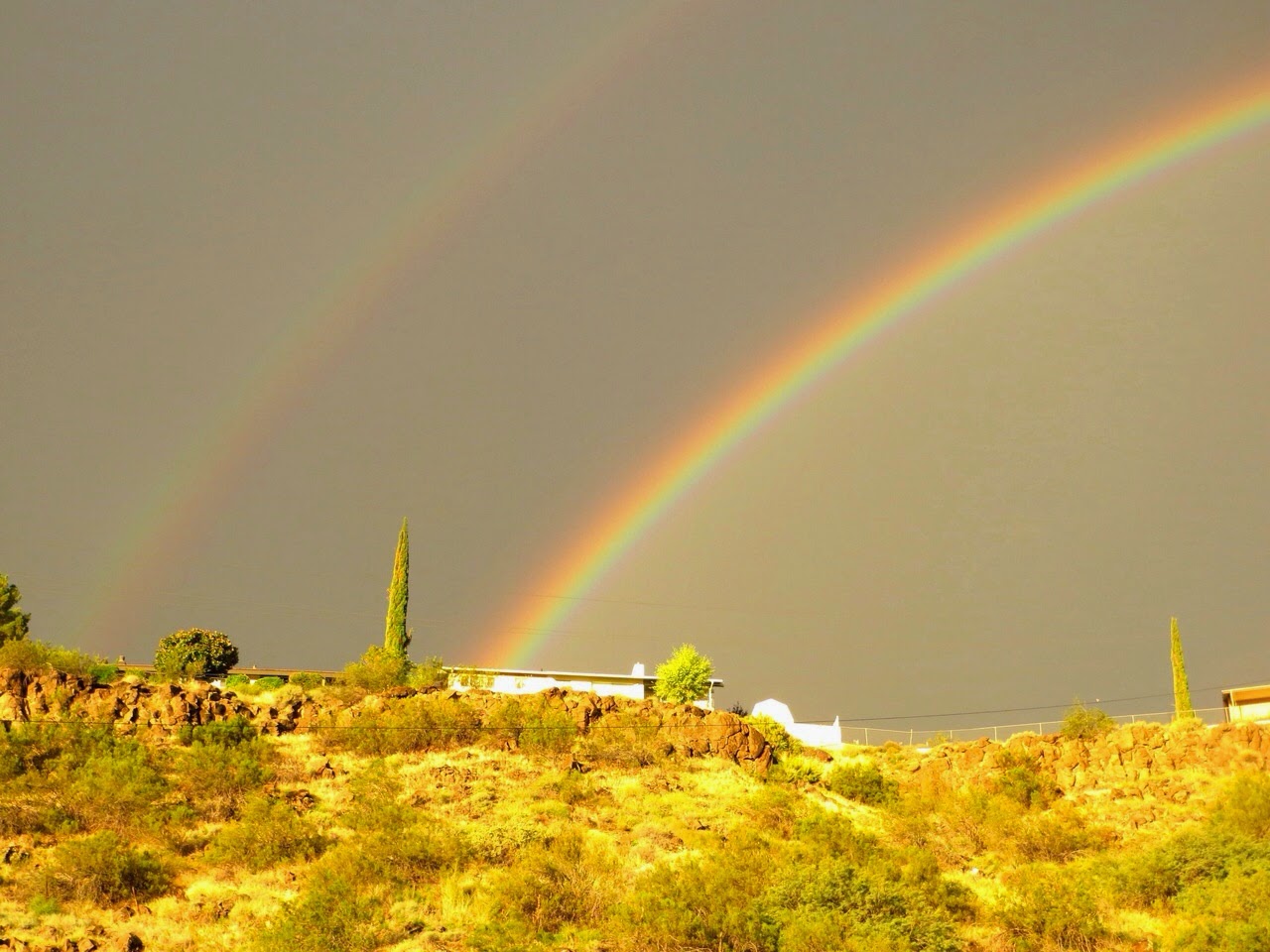 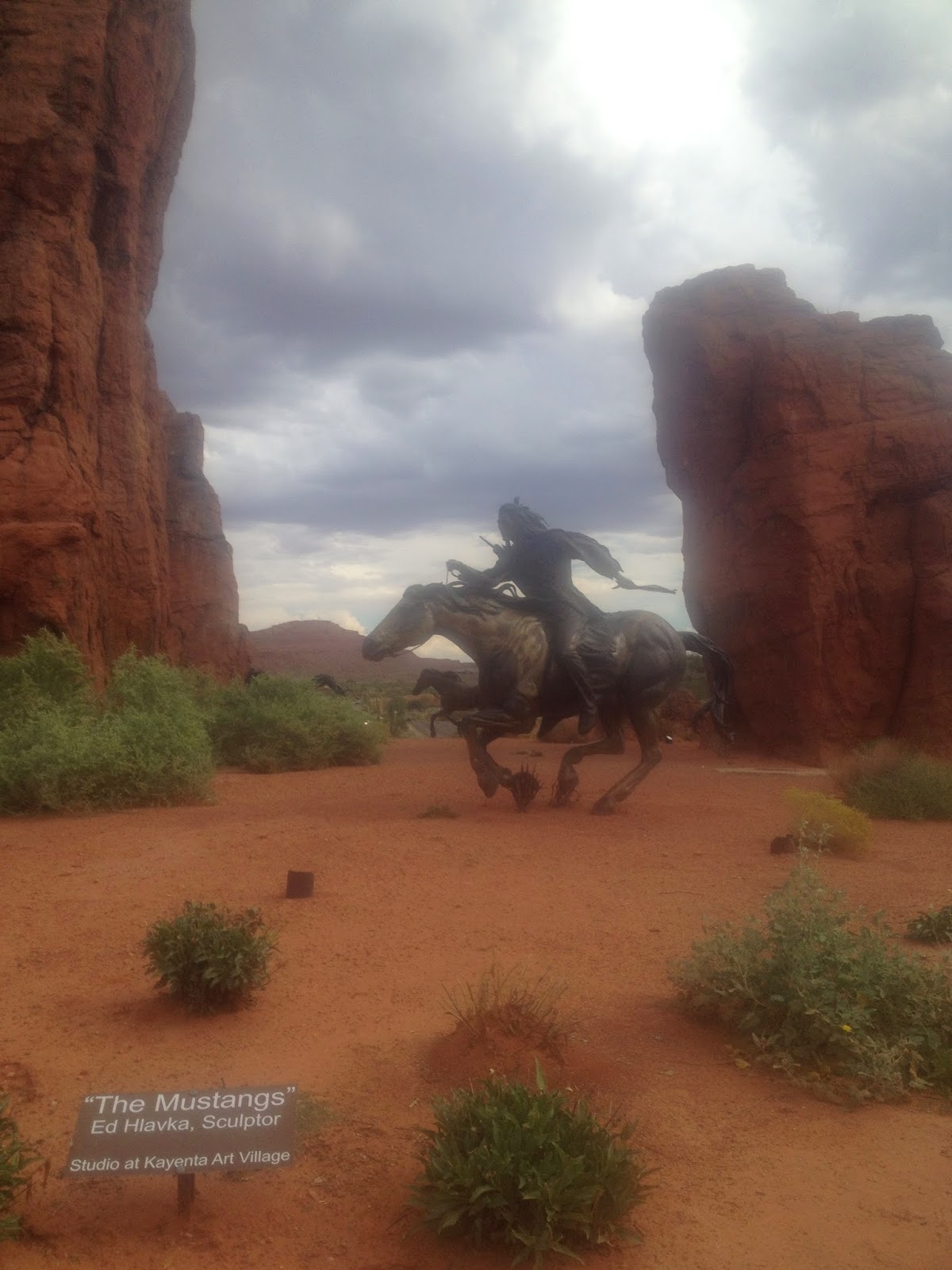 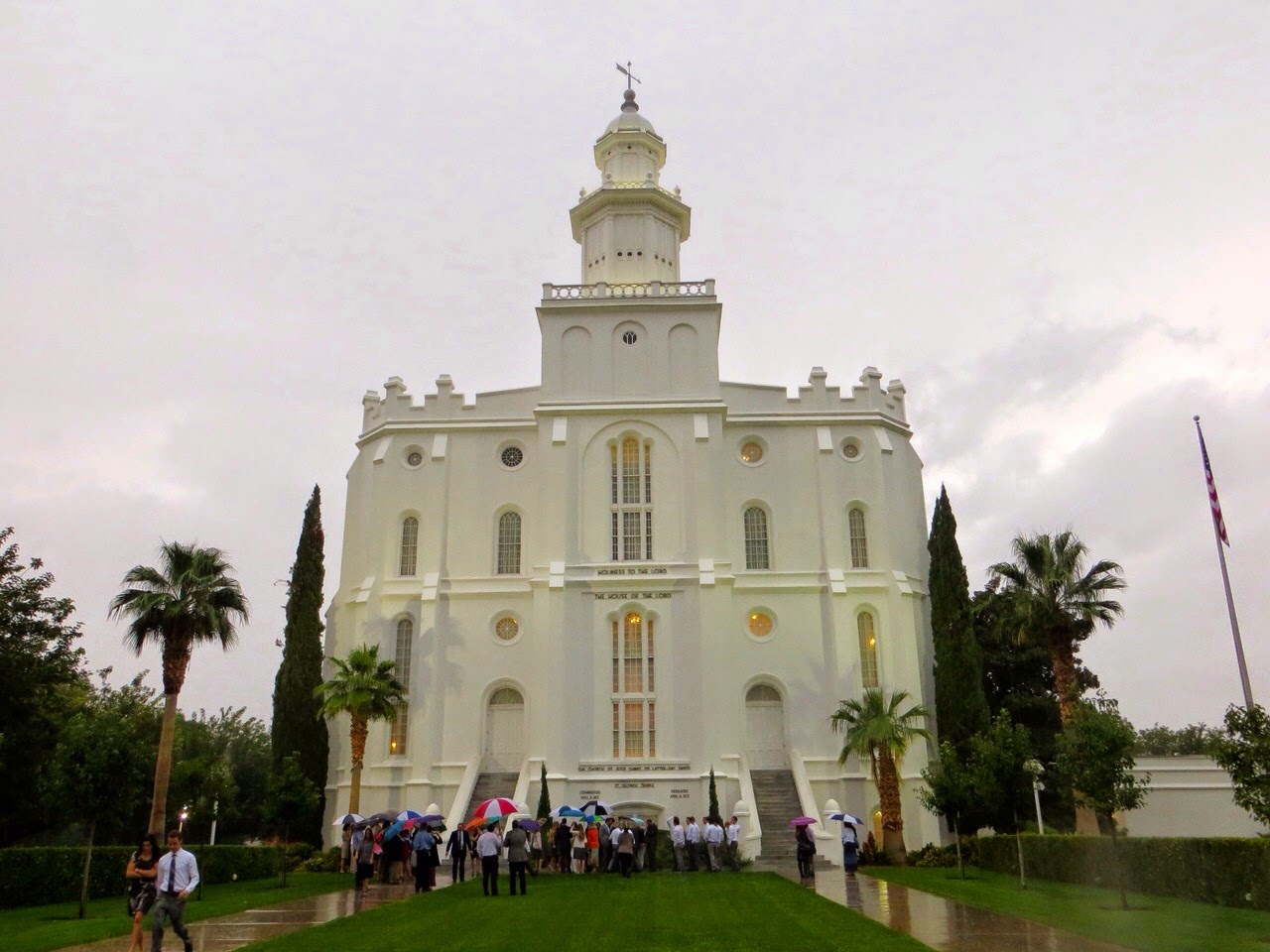 So St George was great; the people, the place and the surrounding area. I joined yoga classes and the windows on either side had glorious panoramas of the land around. I had a wonderful sunset as I did my laundry and wrote postcards. I rose early and drove to watch the sun come up. I would hit Zion one more time. I wanted to see ‘The Narrows’ and do this hike. The storm the previous day had led to a closure of this and I could feel the angels calling me again. I did it a second time. I met Travis and his two buddies from Kentucky and chatted with them on the initial incline. They had their camping gear and this was certainly going to be a slog. They were surprised I was all alone. I saw not one other person hiking this alone, Osama said the same. I met a couple coming down and they wanted to know if it was worth it. She realises I am alone. Incredulity. I am fine, I say. I love it. She smiles and wishes me well. I run down the rest of the trail and meet a tarantula on the way. I am so surprised that I forget to take a photo.

I leave Zion on an amazing drive through the canyon and head to Bryce Canyon and possibly Calf Creek. Nowhere to stay and unsure of what will happen next, but my time with Saint Christopher and magical Doctor O is enough to carry me on my way. I feel exhilarated.

‘And I still lose myself
While making plans.’
~Above and Beyond 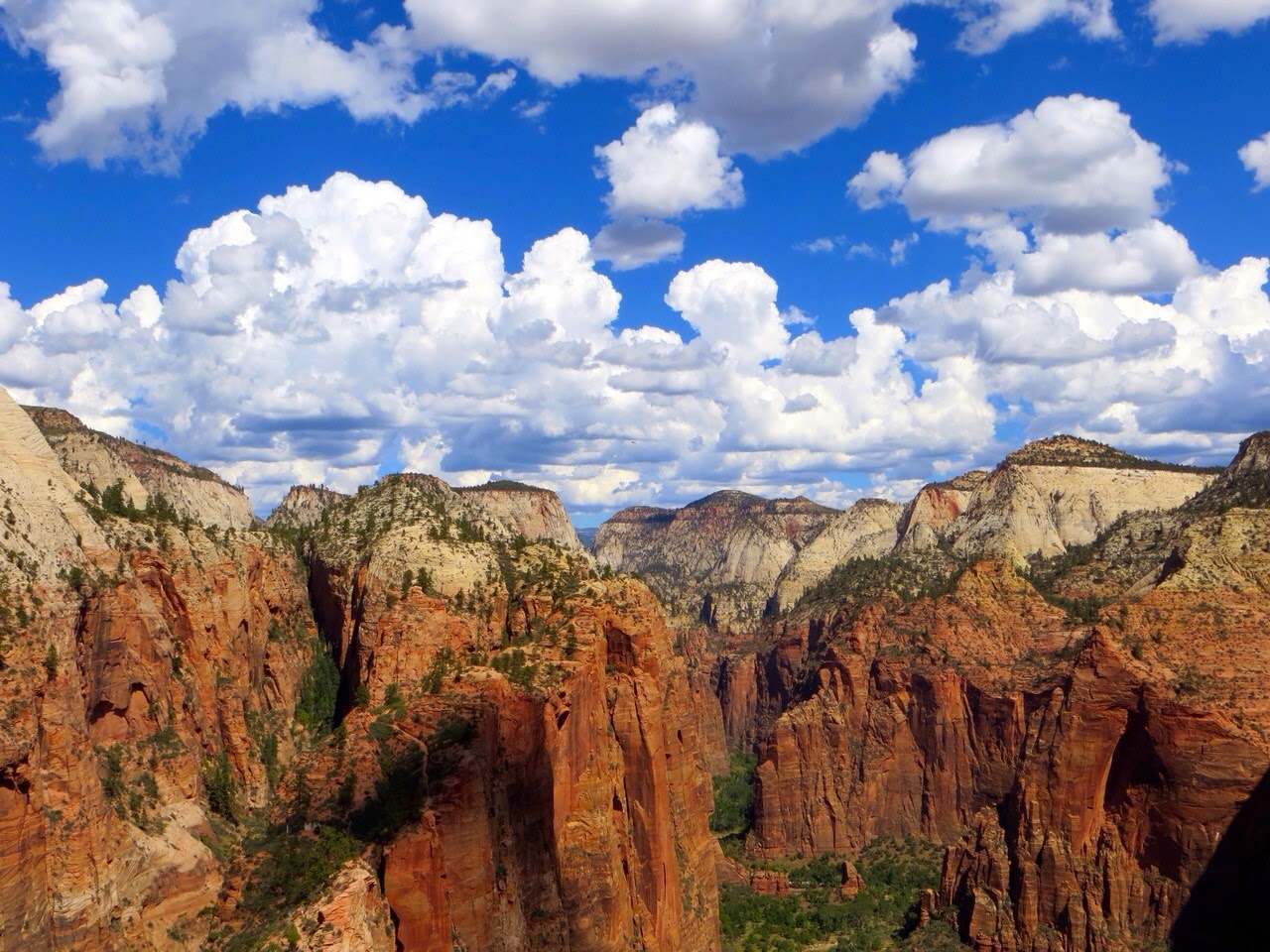 So before I head off with the girls, Mary and Ulle, on a little jaunt to Malaga to check out a potential retreat location, I contemplate the many scenarios in which we travel and I concur: when you travel, travel on stardust and trust… Travel when you can with the people you love and if you do travel alone you will always find people to love along the way!

Any cookies that may not be particularly necessary for the website to function and is used specifically to collect user personal data via analytics, ads, other embedded contents are termed as non-necessary cookies. It is mandatory to procure user consent prior to running these cookies on your website.